The rings of Saturn are one of the most spectacular sights in the sky. Less striking rings have also been found around all the other giant planets in our Solar System – Jupiter, Uranus, and Neptune.

But despite many careful searches, no rings had been found around smaller objects in the Solar System — until now. Observations of an asteroid called 10199 Chariklo have shown that this object is surrounded by two fine rings.

As Chariklo passed in front of a distant star, astronomers realised something additional was blocking out the star’s light. To their surprise, it turned out to be because of two tiny rings, one seven kilometers and the other three kilometres wide.

This is the smallest object ever found to have rings surrounding it. And we’re not quite sure how the rings got there. Most likely they were created when the minor planet collided with another object, throwing bits of rock into space that were then re-captured by the planet’s gravity.

Try to imagine how it would be to stand on the surface of this icy object — small enough that a sports car could drive fast enough to launch itself off the surface and into space — and stare up at a 20-kilometre wide ring system that is 1000 times closer than the Moon!

Chariklo is part of a group of objects know as ‘Centaurs’, which orbit the Sun between Saturn and Uranus in the outer Solar System. 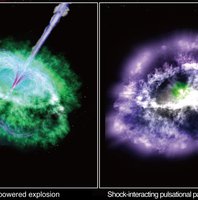