For the first time, astronomers captured images of a strange rocky comet, breaking apart as it went closer to the Sun. Meet 323P/SOHO – a comet that orbits the Sun nearly every 4.2 years, just like the Earth goes around the Sun every year. Astronomers have discovered just a few like these so far. Could there be something destroying these objects before they reach the Sun? Let’s find out!

Almost all objects in our Solar System move around the Sun in a stable orbit, like a merry-go-round. Sometimes space rocks like asteroids get ‘kicked-out’ of their orbits due to the gravitational effects of nearby planets. These objects end up being comets that orbit too close to the Sun ('near-Sun orbit') where they eventually fall into and die. Because they pass so close to the Sun, they are difficult to spot and study.

To better understand these objects, a group of international astronomers set out to observe the comet 323P/SOHO with multiple telescopes, including the Subaru Telescope in Japan. This is not an easy task because the orbit of such comets is not well-known, making it extremely difficult for astronomers to know exactly where to look for them.

Thanks to the wide field view of the Subaru Telescope, astronomers were able to find the comet and point other telescopes at it. The telescopes observed 323P/SOHO, collecting precious data as the comet danced around the Sun.

To their surprise, the team found something incredibly interesting: the comet that initially looked like a dot also has a long hidden tail of dust! Researchers believe that this could be due to the Sun’s radiation causing parts of the comet to break off, just like ice cubes break when we pour hot water over them. This could explain what really happens to near-Sun comets, what destroys them and why there are so few of them left.

Researchers also found that 323P/SOHO rotates really fast and has a very strange colour, unlike any object in the Solar System. But do all near-Sun comets look alike or have the same properties and similar fate? These are some of the questions puzzling astronomers today. Only further observations of other near-Sun comets will tell!

Image: Near-Sun object 323P/SOHO observed by the Subaru Telescope on December 21, 2020 (left) and CFHT on February 11, 2021 (right). 323P/SOHO on its way to perihelion is seen as a point source in the center of the left image; after the perihelion, the comet has developed a long narrow tail as seen in the right image. Credits: Subaru Telescope/CFHT/Man-To Hui/David Tholen.

This was the first time 323P/SOHO was captured by a ground-based telescope. The multiple telescopes include the Subaru Telescope, the Canada France Hawaii Telescope (CFHT), the Gemini North telescope, Lowell’s Discovery Telescope, and the Hubble Space Telescope. 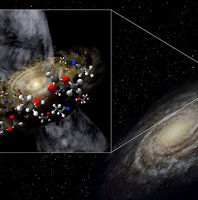 A baby star wrapped in a cosmic cocoon 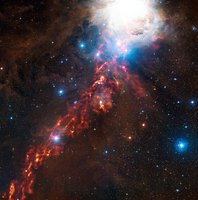