In a nearby star system, three objects are conducting a unique dance: two stars are waltzing with a black hole. This is also the closest black hole to Earth that we know of!

In this special dance, one of the stars and the newly-discovered black hole are circling around one another once every 40 days. A second, outer star is orbiting around the inner pair at a much greater distance.

What is most surprising about this system is how close it is to us. In fact, it’s the closest black hole to Earth that we know of! Astronomers working with one of the European Southern Observatory’s telescopes in Chile have found evidence for this black hole just 1000 light-years away.

The star system that this lurking black hole calls home is so near that you could see it with your naked eye if you are looking into the dark night sky from here on Earth in the Southern Hemisphere.

Astronomers believe hundreds of millions of black holes could be out there, but so far we know of very few. This means scientists will be on the lookout for other black holes and cosmic waltzes nearby!

Even though this is the closest black hole we know of, we don’t have anything to worry about. It’s located roughly 1000 light years away - that's over one trillion times longer than the Great Wall of China! 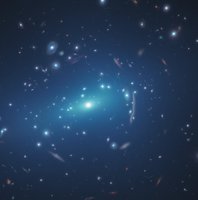