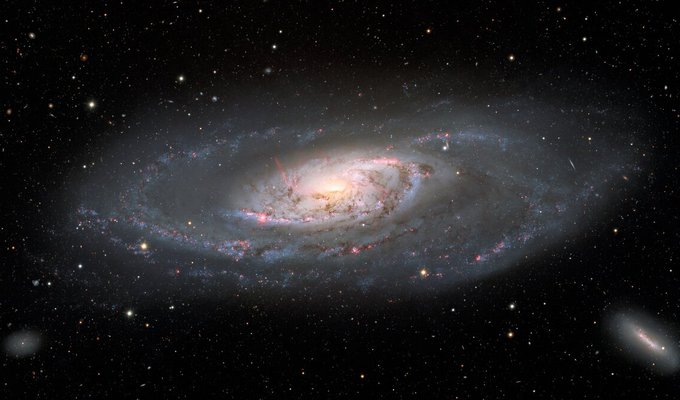 If we could see the majestic spiral galaxy Messier 106 in the night sky with our naked eye, it would be very, very small - in fact, it would look smaller than a penny held at arm’s length.

Messier 106, also known as NGC 4258, is nowhere in our galactic neighborhood - even if we could travel at the speed of light, the trip would be impressively long: it would still take us 20 million years to get there!

As our eyes alone cannot reach that far and see that well, astronomers use very large and powerful telescopes to look into the vastness of the sky.

Using the Nicholas U. Mayall 4-meter Telescope in Arizona, United States, researchers have done just that - they took the best picture ever of Messier 106, and it looks beautiful!

At the heart of the galaxy is an energetic gas and dust-eating supermassive black hole that spews red streamers of gas as it spins at incredible speeds. Now we have a better view of what is happening there. Even the Hubble Space Telescope could not see the center of Messier 106 so clearly!

The spiral galaxy Messier 106 is especially important because it contains Cepheid variables - one of the objects that are used as “cosmic yardsticks” to measure the scale of the Universe. Astronomers call these objects “standard candles,” since their luminosity is well known.

Scientists then compare the real brightness of these standard candles with how bright these objects appear to be for us here on Earth. This way, they can measure how distant these objects - like the galaxy Messier 106 - are from us down here.

This is how astronomers adjust their telescopes to make better observations - just like when we go to the eye doctor and find out we have to change our glasses to see better!

Cepheids, or Cepheid Variables, are a type of pulsating stars that brighten and dim with regularity. They are very commonly used as standard candles in astronomy and they exist in our own galaxy, the Milky Way, as well as in more distant galaxies across the Universe. It was Henrietta Swan Leavitt, an American woman astronomer, who discovered the relationship between the period of variability and luminosity in Cepheids.

It’s My Turn to Shine!