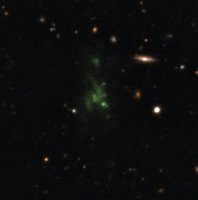 What is making the Glow-worms Glow?

Asteroid Day: Look Out for Rocks Falling From the Sky!