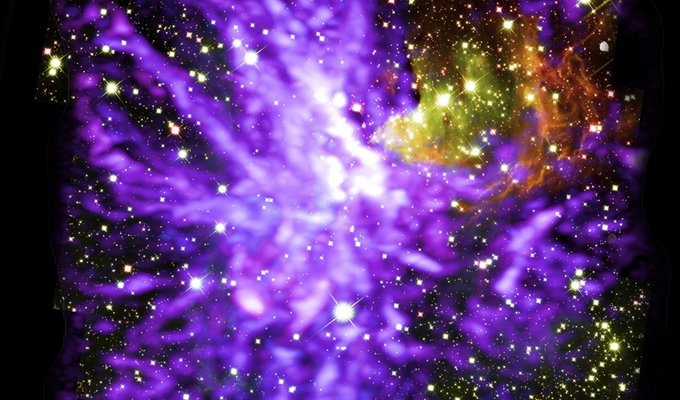 When building a puzzle, it’s not until the project is complete that we see the full picture. This is often the case in astronomy too, as astronomers can study the same object with different kinds of light and by using different instruments in order to get the full picture.

Astronomers have made their own puzzle mosaic by combining more than 750 observations of the same star cluster, known as G286.21+0.17. The result is this beautiful image that looks like purple cosmic fireworks!

Science Behind the Beauty

A star cluster is a huge group of stars bound together by gravity. It can contain a few hundred stars or many millions. Most stars in the universe, including our Sun, were born in massive star clusters. These clusters are the nurseries of galaxies.

Astronomers are still trying to uncover how star clusters are formed from large clouds of gas and dust. This mosaic of fireworks image above shows us the star cluster as it is caught in the act of forming!

This image is a combination of hundreds of images from the Atacama Large Millimeter / Submillimeter Array (ALMA). This telescope is special because it captures sensitive radio waves. These radio waves have nothing to do with sound, but are a special type of light which we cannot see with our eyes. The radio waves that are emitted from the star cluster pass through dense clouds of gas in space and travel to our telescopes, even when visible light that we see with our eyes is blocked. The images of radio waves taken by this telescope can be seen as the purple fireworks in the image.

This beautiful fireworks mosaic was created by the collaboration of two telescopes. While the ALMA telescope captured the purple fireworks in this mosaic, the stars were observed by the NASA/ESA Hubble Space Telescope. This telescope observed the stars using infrared light, which can travel through materials like cosmic dust and show us what is hiding within. The powerful winds from the cluster’s biggest stars are blowing away nearby gas and dust.

Together, these many images produce a more complete picture of what a star cluster looks like as it is forming!

This star cluster is located in the Carina region of our own Milky Way galaxy. It’s located about 8000 light-years away.