One of the most exciting things happening in science at the moment is the search for alien life. We’re lucky enough to live in a time when this search is getting serious.

Just 25 years ago, the only planets we knew of in the entire Universe were those in our Solar System. Now, we know that most stars have planets orbiting them! The next step is to single out planets that are like Earth.

We’ve just found exactly what we’ve been searching for, a new solar system with seven small, rocky planets. The new system is a record-breaker on two accounts: it has the most Earth-sized planets, and the most potentially life-bearing worlds.

The new solar system was discovered when astronomers noticed the star’s light dimming slightly as the planets passed in front of it. It’s impossible for us to see such distant planets directly, but we can actually gather lots of information using this technique.

We know that all of these new planets are made of rock, they’re a similar size to Earth and at least three of the planets could have oceans. However, these planets all orbit much closer to their star than Earth, or even Mercury, which is the closest planet to our Sun.

Yet, the temperature on the planets is actually similar to the rocky planets of our Solar System!

This is because the star at the centre of this solar system is an ‘ultracool dwarf star’. It’s 10 times less massive than the Sun and four times cooler, meaning it gives off much less light and heat.

Astronomers expect to find lots of Earth-like planets around dwarf stars, but this is the first time such a packed solar system has been discovered.

The star at the centre of this solar system is small, but it’s by no means the smallest star known. That title goes to OGLE-TR-122b, which is only slightly bigger than Jupiter!

This Space Scoop is based on Press Releases from ESO , SAAO . 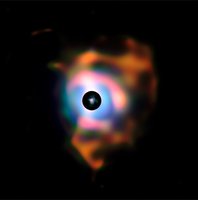