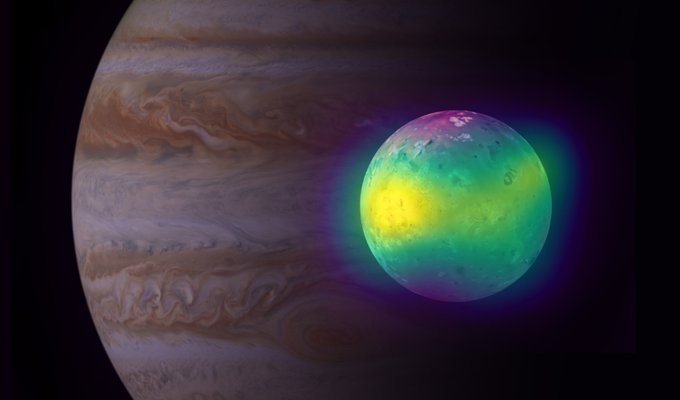 Volcanoes are known for their brilliant eruptions here on Earth. In space, they are giving astronomers a window into the insides of other celestial bodies!

Jupiter’s moon Io is not a welcoming place for humans. It is the most volcanically active moon in our entire solar system! The moon is home to more than 400 volcanoes that spit out smelly sulfur gases. This gives Io its distinct colors of yellow, white, orange and red, which are caused by this gas freezing on its surface.

We study moons like Io to better understand how moons form and evolve, especially those that are very different to our own moon. It also helps astronomers investigate if life could exist in other places!

We cannot breath Io’s atmosphere because it is made out of these volcanic gases and it is very very thin. Now, new radio images from the Atacama Large Millimeter/submillimeter Array (ALMA) show for the first time the direct effect of volcanic activity on the atmosphere of Io.

A team of astronomers used ALMA to take snapshots of the moon when it passed in and out of Jupiter’s shadow (this is known as an “eclipse”).

During the eclipse, the astronomers could, for the first time, clearly see signs of two special gases known as sulfur dioxide (which is toxic to humans) and sulfur monoxide (which is typically only found in space) rising from the volcanoes.

This new image (seen above) shows Io in radio light (which is invisible to us) and optical light (which is what we can see with our eyes). The image clearly shows the gases of sulfur dioxide (in yellow) rise up from its volcanoes.

By studying Io's volcanoes, we learn not only about what lies underneath its surface, but also about its atmosphere. The scientists discovered that almost half of the moon's atmosphere is made out of gases that rise up from the volcanoes.

Achievement Unlocked: Landing on a Comet