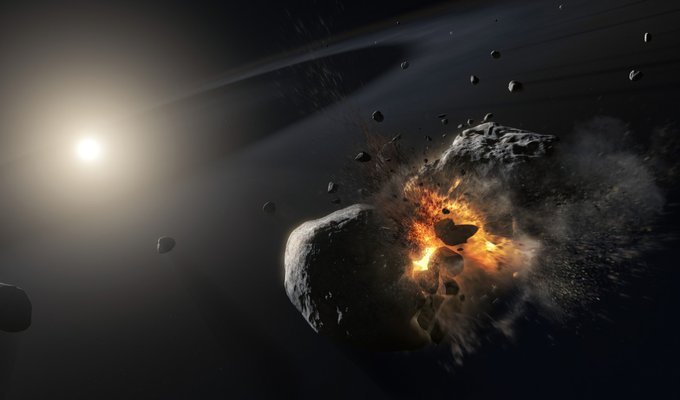 Because space is so big, it is not often that objects in space collide. Although it is even more rare for us to find clues or evidence of these cosmic collisions, a team of astronomers might have done just that!

Researchers using data from the NASA/ESA Hubble Space Telescope seem to have found a growing cloud of dust. This cloud was created by a giant and rare collision that took place between two large objects orbiting a bright nearby star called Fomalhaut.

Fomalhaut is 25 light-years from Earth and is more than 15 times as bright as our Sun!

Researchers believe that each of the objects measured about 200 kilometers across - that’s about as long as the English Channel! The dust cloud that was created from this giant collision grew to a size of 160 million kilometers wide. That’s close to the size of the orbit of Venus around our Sun!

The objects that collided are known as “planetesimals”. Despite having the word “planet” in its name, these objects do not look like a typical planet. Instead, they are much like young and small planets made of rock and ice of various shapes and sizes that have not yet developed to become full sphere-shaped planets.

Astronomers originally thought this cloud was a planet beyond our solar system, known as an exoplanet. Observations made over several years by the Hubble Space Telescope seemed to show that the supposed planet had gradually vanished from sight.

By studying Hubble’s data, astronomers now think that a planet never existed in the first place. It appears to be an expanding cloud of very fine dust particles caused by a titanic collision between two icy asteroid-sized bodies. Just like all material is blown away in an explosion, this cloud keeps expanding. As the dust particles are increasingly spread over a larger area, the cloud gets harder to detect. This is exactly what the observations show!

The researchers believe that a collision takes place between objects in orbit of the Fomalhaut star once every 200,000 years. Since witnessing such an event is very rare, this offers a unique opportunity to learn more about these cosmic collisions!

Astronomers believe that the Moon might have been formed by a planetesimal colliding with the early Earth approximately 4.5 billion years ago!