Looking into a famous black hole and its neighbourhood
April 16, 2021 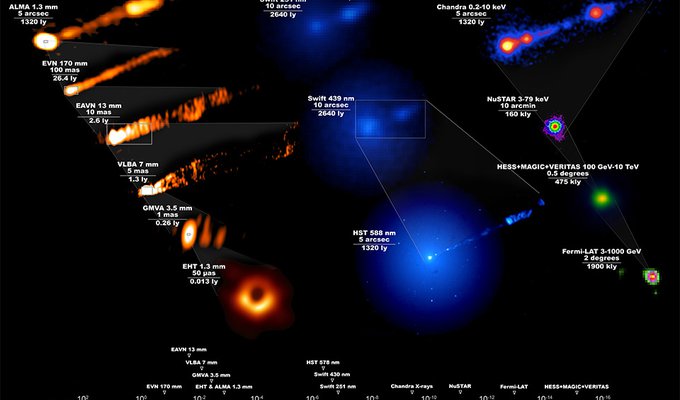 Two years ago, the world marvelled at the first look ever into a supermassive black hole: scientists at the Event Horizon Telescope gave us a glimpse of the “monster” at the center of the M87 galaxy, about 55 million light-years away from us.

This week, 19 observatories are releasing data that will allow us to have a sharper understanding of this gigantic black hole and make better tests on Einstein’s General Theory of Relativity.

According to this theory, gravity is a curvature of spacetime caused by massive objects.

Hard to visualise? Try putting a heavy football (like those professional ones) or a heavy box on a fluffy bed. Then put some marbles around it. They will fall closer to the ball – or the box – because of the “sinking” on the bed – the ball’s mass creates this dent on the surface of the bed. If this ball were a planet, this “sinking” would be the spacetime curve in the Universe.

The more massive the planet, the deeper the dent, or the more “sinking” there will be – and smaller objects in outer space, like marbles, will be attracted to it more strongly.

It happens that black holes, as the most powerful “sinking” objects in the Universe (or objects with extreme gravity), are great places to see Einstein’s General Theory of Relativity at work up to its limit.

The immense gravity of black holes can fuel jets of particles that travel across gigantic distances and move fast, really fast. In fact, they run almost at the speed of light! These jets produce different types of light, from what we can see with our eyes to the invisible ultraviolet and X-ray, ranging over the entire electromagnetic spectrum.

Each black hole has its own “jet signature”. These patterns can give astronomers some clues about the way a black hole rotates or how much energy it has. This is a hard call because these patterns change with time, so scientists have to follow them very closely – and this is why the data from the 19 observatories is important.

With so many different images and so much data, scientists want to understand the relation between black holes and jets they spit – one of the greatest mysteries in astronomy!

The picture is a composition of images showing how the M87 system looked when astronomers took the first photo of its black hole in 2017 (revealed to the world in 2019). Using data from 19 observatories scattered across the Earth and outer space, this image shows how large the M87 black hole is – and how far its jets can go, crossing the border of its host galaxy.

There is a lot to know about the jets coming out from black holes. One of the things astronomers already know is that these jets are a tremendous source of energy. Stemming from black holes, they can travel gigantic distances, escaping even its host galaxy, like a huge power cord!

The Mystery of the Monster Pulsar

A Lesson in Astronomy Mumbo Jumbo