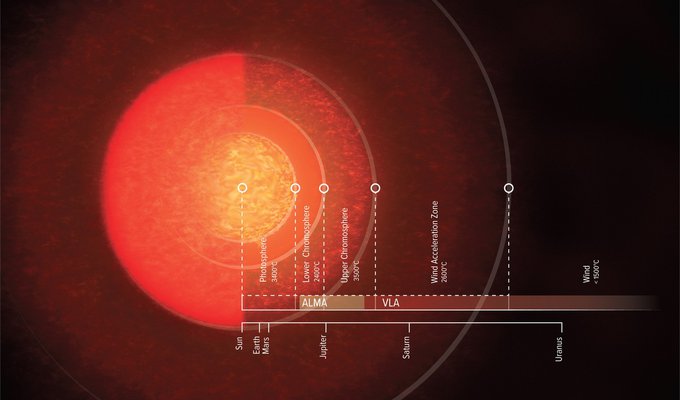 Not only planets like Earth have atmospheres, stars have them too! In order to better understand stellar atmospheres, a team of astronomers has mapped the atmosphere of a supergiant star in the most detail yet.

Earth’s atmosphere has a series of layers, each with its own specific traits. We live in the lowest level, the troposphere. This is where most weather activity takes place and where the majority of clouds are located. The higher you go, the less air there is to breath and Earth’s atmosphere gradually fades away into  space.

The astronomers studied Antares; a red supergiant star. (and the closest star of this type to Earth!). Red supergiants are among the largest stars in the Universe and are colder than most other stars. These stars are almost at the end of their lifetime and on their way to becoming a supernova.

The star’s closest layer to its surface is called the photosphere. This is where the star’s energy is released as light. The next layer is the chromosphere. The chromosphere is heated up by magnetic fields and shock waves that are created by the bubbling gas on the star’s surface. This is how heat is transferred to the outer layers of the star’s atmosphere and into space.

When seen in visible light, Antares is big enough to fill the solar system beyond the orbit of Mars! But when astronomers studied the star using radio waves, the supergiant turned out to be even more gigantic. The new research showed that the supergiant’s atmosphere layers actually reach out 12 times farther than previously thought!

The astronomers also found that the atmosphere is not as hot as they initially thought. Instead, compared to other stars, they describe Antares’ atmosphere as ‘lukewarm’. Again, this discovery was thanks to the use of multiple different telescopes.

This new finding suggests a star's reach expands much further into space than we thought. However, more research is still needed to better understand the atmospheric layers of stars.

Antares is one of the largest and brightest stars visible to naked eye in the night sky. What can’t be seen with the naked eye however is the star’s smaller companion. Antares is a binary star, which means these stars circle around one another.

The Wings of the Seagull Nebula