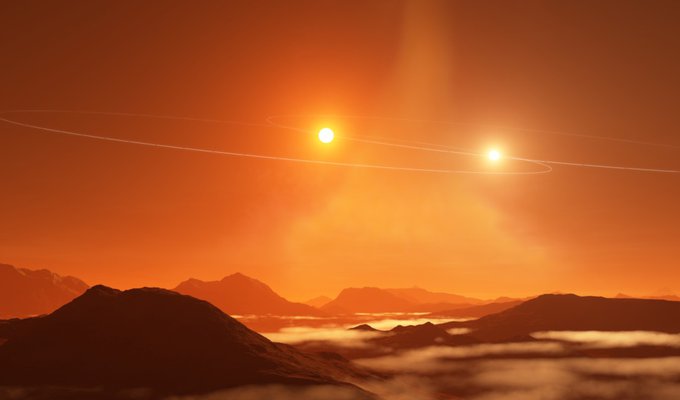 Imagine standing on the planet Tatooine from Star Wars and seeing two stars in the sky...

When we study geometry in school, we are learning about the shapes and sizes of different objects. Planets and stars also have their own geometry, but sometimes the answer doesn’t add up.

By studying the geometry of birthplaces of planets, astronomers hope to discover how planets form in different environments.

In the earliest part of its life, a star is called a ‘protostar’. The star is simply a ball of cold gas and dust that is collapsing under the force of gravity. It doesn’t even have a nuclear fire in its heart yet, which powers older stars.

With time, the cloud collapses and it begins to spin – forming a flattened disc around the protostar. Material from the disc feeds the star to make it grow. As it continues to collapse, the protostar squashes into a tighter, hotter ball.

Eventually, the left-over material in this disc forms rings. In these rings of dust and gas, called protoplanetary discs, is where planets are born.

These rings are not found just around single stars. When two stars are born together and circle around each other, they create what we call a binary system. Astronomers believe that around half of all planets live in binary star systems!

Like a special cosmic geometry problem that looks at all of these different pieces of the puzzle, astronomers are studying the protoplanetary discs around protostars in binary systems. To their surprise, the geometry is not very clean or simple. The binary stars and their discs of material do not always line up! They found that if the two protostars in a binary system take a longer time to circle around each other, then it appears more likely that their protoplanetary disc will not be properly aligned to these stars.

Based on this finding, the astronomers believe that misaligned planets around binary stars should also be out there for us to find!

As a protostar grows and evolves into a full star, it experiences a huge increase in temperature. As it continues to collapse, the protostar squashes in to a tighter, hotter ball. This can take it from a freezing -250 °C to anywhere up to 40,000 °C (on their surface) when they become fully fledged stars!

This Space Scoop is based on a Press Release from NRAO.