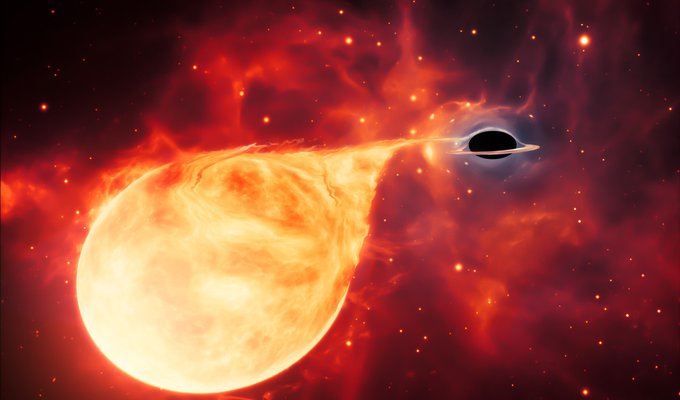 When you pick out a new shirt in the store, you must first find your size: small, medium, or large. Did you know that the dark monsters of the Universe, black holes, also come in different sizes?

Anything that gets too close to a black hole is pulled to it with such a strong force that it has no chance of escape. Even light – the fastest thing in the Universe – is doomed if it goes near one of these monsters. This is why black holes are black. However, they are not really holes and they are not empty. Black holes are actually filled with a lot of material that is crammed into an extremely small region.

Astronomers are well aware of the supermassive black holes that exist at the heart of most galaxies. There are also smaller black holes that are created by the explosive death of large stars. However, black holes also come in a medium size, but they are very hard to find.

The NASA/ESA Hubble Space Telescope has found the best evidence yet of a medium-sized black hole, known to astronomers as an ‘intermediate-mass black hole’ (IMBH). These black holes are often known as the missing link for scientists who are studying how black holes evolve and grow. To date, there have been very few IMBHs found in the Universe.

IMBHs have been particularly tricky to find because they are smaller and less active than supermassive black holes, and they do not usually have nearby sources of food. This is because their gravitational pull is not strong enough for them to be constantly drawing in stars and other cosmic material to eat. If however an unlucky and doomed star does get too close to one of these black holes, it will not only get torn apart, but this bright encounter can be seen by astronomers - which is exactly how astronomers found this new IMBH with the Hubble Telescope!

This new IMBH found by the Hubble Space Telescope, although medium in size, is over 50 000 times the mass of our Sun!

Lions in the Cosmic Zoo

The Day the Earth Smiled

E is for Exoplanets Everywhere!