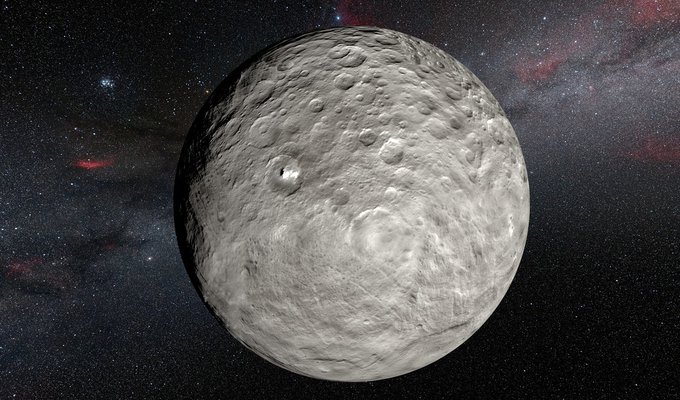 Have you heard the tale of Snow White and the Seven Dwarfs? Well, our Sun has a collection of dwarfs, too — five dwarf planets. Their names are: Ceres, Eris, Makemake, Haumea and Pluto.

Four of these dwarf planets lie in the cold outer part of the Solar System, beyond Neptune.

The fifth dwarf planet lies in between Mars and Jupiter, in a region known as the ‘asteroid belt’ (because it’s packed full of asteroids). This dwarf planet is called Ceres (pronounced ‘see-rees’) and you can see a drawing of it above.

Do you see the white patches on Ceres’s surface that look like snow? These bright spots have puzzled scientists for the last few years.

In 2007 NASA even sent a spacecraft called DAWN to take a closer look and help solve the mystery. DAWN arrived at Ceres last year and is examining the snow-white patches, but for now it’s anyone’s guess what the spots could be.

What do you think: Are these bright patches made of ice, rock or salt? Were they put there by a volcano or geyser? You can visit the World Ceres page to cast your vote: www.jpl.nasa.gov/dawn/world_ceres/. But before you do that, you might want to hear the latest clue: the spots are changing!

It looks like each day the strange white material evaporates in the sunlight, like a puddle of water in a desert, and disappears into space. Then comes the most exciting part – the material somehow reappears. Something exciting must be happening underneath the surface, to push the material out.

Ceres already has more in common with Earth than its rocky neighbours: scientists believe that the dwarf planet might contain even more fresh water than Earth! Although unlike Earth's water, water on Ceres would be in the form of ice hidden deep under the surface.

If the dwarf planet really is active under its surface, this will be another thing that sets it apart from its asteroid neighbours. Watch this space as we investigate further!

When it was first discovered, Ceres was classed as a planet. But, like Pluto, it was eventually demoted to a dwarf planet. The number of planets in our Solar System has changed many times over the years. This fun website lets you explore how many planets there were at different dates: cosmos-book.github.io/how-many-planets/index.html