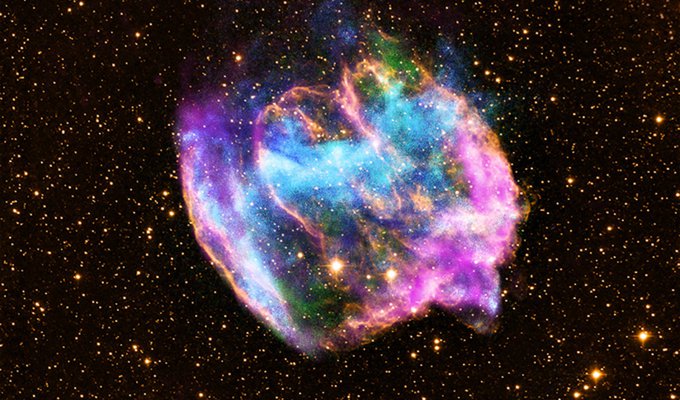 Like the famous detective Sherlock Holmes, astronomers have to be good at solving puzzles by piecing together clues and evidence. When scientists using the Chandra X-ray Observatory noticed the strange, distorted shape of this supernova remnant, they knew something unusual had taken place. After scouring through their data and shooting down all other possibilities, astronomers realised they may have uncovered a dark secret lurking within this picture — a young black hole!

The supernova explosions that tear apart massive stars normally blast away material evenly in all directions and leave behind a symmetrical bubble (the same on both sides). However, in this supernova, material from the north and south poles of the star (yes, stars have poles, too!) was blasted out much faster than anywhere else. The resulting barrel-shaped remnant gave astronomers their first clue that this star’s life ended in an unusual way.

Most of the time when a star goes supernova, the remaining core is squashed down into a tiny ball called a neutron star. Neutron stars normally give off X-ray radiation, which astronomers can photograph using special telescopes. But a careful search of the data showed no X-ray radiation or other evidence for a neutron star. This means an even more exotic object was probably formed during the explosion — a black hole! If this turns out to be correct, it'll be the youngest known black hole in our entire Galaxy, at just 27,000 years old!

In astronomy, we call all material heavier than hydrogen and helium gas 'metal'. All these ‘metals’ are forged deep inside stars. When a star dies, the metals are scattered back into space to become new stars or planets, or even people!