Ringside Seats To A Planetary Bake Off
30 października 2014

We have no idea what alien life might be like, but many people believe it probably needs a planet like ours to live on; with mild temperatures and watery oceans. The first place we look for this type of planet is around stars like our Sun.

During their search, astronomers have found lots of giant planets living in binary systems. Most of these have circle around both stars. The only time planets have been found circling just one of the stars in a binary system is when the two stars are very far away from one another.

However, the ingredients for a new planet have just been spotted in a small cloud around one of the stars in a binary system and bigger cloud around both stars. The star would normally eat this sort of cloud in no time, but this one has found a way to survive, improving its chances of one day becoming a planet!

The small cloud’s method of survival is to constantly refill itself with material stolen from the bigger cloud. It currently has enough material to make a Jupiter-sized planet. Jupiter is the largest planet in our Solar System, it’s over 300 times more massive than the Earth!

It’s believed that around half of all planets live in binary star systems! 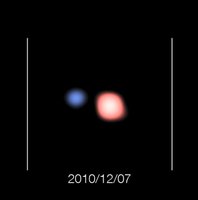