Saturday 14 February is Valentine’s Day and love is in the air for couples around the world...and across the Universe. This picture shows a pair of stars that spend day after day dancing around each other, slowly growing closer. Eventually they will merge together into one star.

But their story is not as romantic as it seems. When these stars do kiss, about 700 million years from now, their passion will ignite a supernova explosion! A supernova is the violent, explosive death of a massive star — or two this case!

The close pair are both white dwarf stars which are tiny and extremely dense stars leftover when a star like the Sun comes to the end of its life. The rest of the star makes a ring of cosmic gas called a Planetary Nebula.

When combined these two stars will contain almost twice as much gas as the Sun. This makes them the most massive pair of white dwarves ever found!

The team of scientists who found this massive pair actually set out to try to solve a different problem. They wanted to find out why these stellar leftovers (planetary nebulae) sometimes didn't form rings, but strange shapes. One of the objects they studied was the cloud in this picture.

Hiding in the heart of the nebula, the astronomers stumbled across the doomed duo. But they did actually contribute to the scientific investigation in the end, by supporting the theory that double stars may cause the odd shapes of some of these nebulae!

White dwarfs are among the oldest objects in Universe since they are the end point in the life cycle of most stars (including our Sun!). 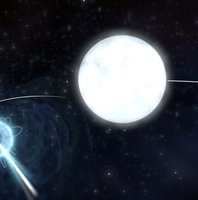