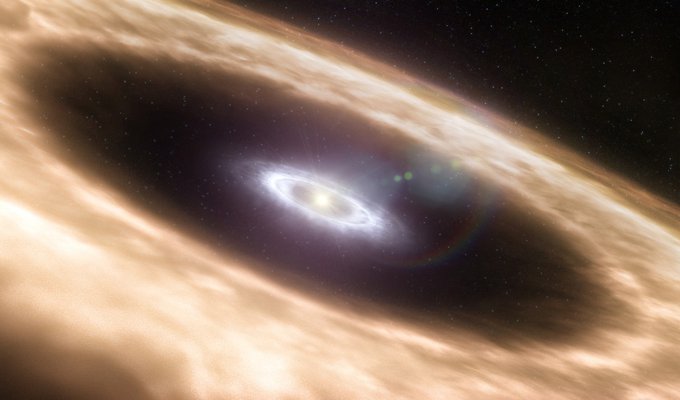 Our Solar System is almost 5 billion years old, compared to the 200,000 years humans have existed, that is like the blink of an eye. So, if there was no one around to see the birth of our Solar System, how can we find out how our cosmic home came to be?

One way is to look at other Solar Systems as they are born. Take the solar system in this picture, for example. It’s looks very much like our Solar System did when it was a toddler.

The star at its centre is a similar size to our Sun and there is even evidence of a giant gas planet. (Our Solar System has four gas giants: Jupiter, Saturn, Uranus and Neptune.) But it’s the outer edge of the young system that looks the most like our cosmic home.

When our Solar System formed, it was awash with trillions of icy, rocky visitors, called comets. Most of the comets close to the Sun were destroyed. They either crashed into one of the planets or moons, or were thrown out into space by the powerful gravity of Jupiter.

But at the very edge of our Solar System there is still an enormous ring, made up of millions of icy comets that circle the Sun. This is called the Kuiper belt (KAI-per belt). Pluto is inside the Kuiper belt, along with a few other dwarf planets.

New images of this young solar system taken by the Gemini South Telescope have revealed a ring around the parent star, about the same size as the Kuiper belt. And just like our Solar System, it probably contains dust and icy particles, too! This picture was created by an artist to show us what the young solar system would look like close-up.

The Gemini South Telescope has provided the best picture we’ve ever had of what the far reaches of our Solar System might have been like when it was very young!

The first mission to the Kuiper Belt and beyond will fly past Pluto in July 2015. It’s called New Horizons.