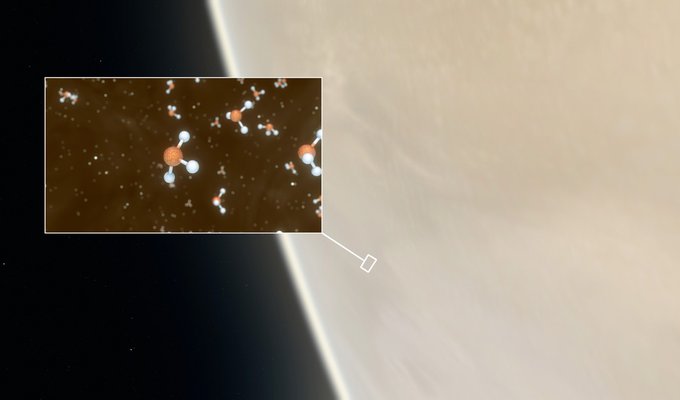 Astronomers and the public are all eager to learn if there is life elsewhere in the Universe. Today, an exciting discovery has been announced that suggests there could be signs of life on a nearby neighbour.

Today an international team of astronomers announced the discovery of a rare molecule — phosphine — in the clouds of Venus.

This exciting discovery of phosphine could point to the existence of life!

On Earth, this molecule is usually created by special microbes that prefer to live in environments where there is no oxygen. This isn’t common, as most living things on Earth need oxygen to survive.

Astronomers have long wondered if the high clouds on Venus could offer a home for microbes. Up in these clouds, the microbes are far from the hot surface of Venus.

Although the high clouds of Venus have pleasant temperatures of around 30 degrees Celsius, they are incredibly acidic — making it very uncomfortable for any microbes trying to survive there.

The molecule was first spotted by the James Clerk Maxwell Telescope in Hawaiʻi. This surprising discovery was then confirmed by the Atacama Large Millimeter/submillimeter Array (ALMA) in Chile.

The team believes their discovery is important because they can rule out many other ways to make phosphine. However, they also understand that confirming the finding of life on Venus will take a lot more work. This means there is much more research (and hopefully exciting findings) to come!

Venus is one of the brightest objects in the night  sky! But it’s visible only sometimes and for small periods: just before sunrise (look east) or just after sunset (look west).

This Space Scoop is based on Press Releases from ESO , ALMA , RAS .

The Mystery of the Sun’s Scorching Halo

Baby Pictures of a Solar System