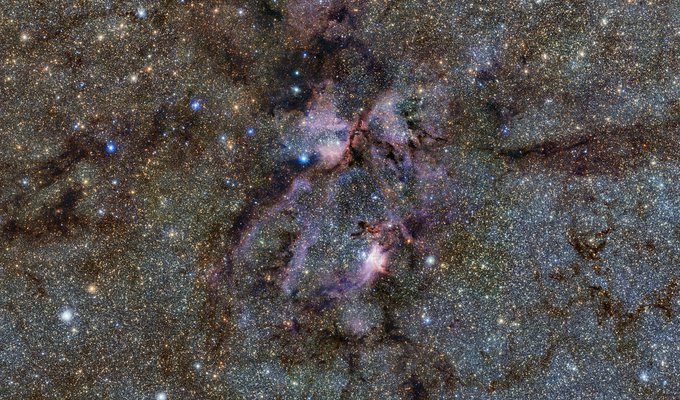 Astronomy is our key to unlocking the secrets of the cosmos, it's not just about taking pretty pictures, although we definitely enjoy them! This breath-taking space picture of the so-called ‘Lobster Nebula’ was snapped during an enormous survey that is being done by a telescope called VISTA. The survey will map the shape of our galaxy, the Milky Way, and help us discover how it formed.

The picture shows a region of space filled with huge clouds of gas and sprawling lanes of dark dust, called a nebula. These clouds have stars growing inside them that glow a brilliant blue-white when seen in visible light. However, VISTA looks at the sky in infra-red light, a type of light our eyes can't detect. In ‘visible’ light — the kind our eyes can see — it looks dramatically different. Take a look here, and you might understand why this cloud is sometimes nicknamed the ‘Lobster Nebula’.

A bright point of light that can be seen near the centre of this picture is known as 'Pismis 24-1'. For a long time, astronomers believed this was the most massive star in the entire sky, with about 300 times as much material as our Sun. Then they realised that it was actually not one, but three huge, bright stars! Even so, all three of these stars are among the biggest known in our Galaxy.

Some scientists think that as many as 2 out of every 3 stars are multiple star systems, like Pismis 24-1. It's difficult to be sure, because separating single stars that are so close together is very hard. But out of the star systems nearest to the Sun, about half are known to contain multiple stars!

Blowing Bubbles around our Galaxy!

Goldilocks and the Three Planets

Ringside Seats To A Planetary Bake Off