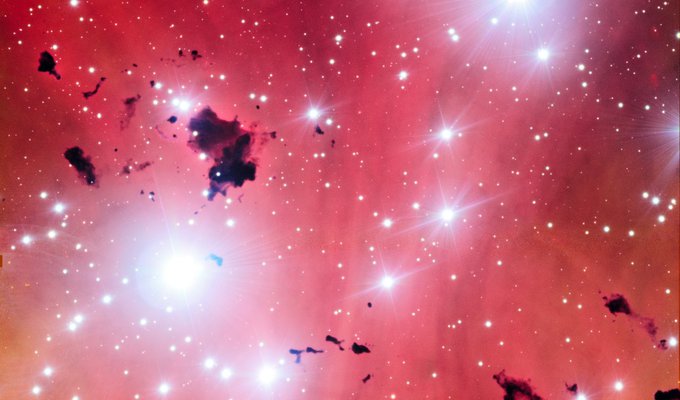 The world's best instrument for looking at the visible Universe turns 15 today. Happy Birthday to the Very Large Telescope! To celebrate, the telescope has been used to take this space photograph of a party in space. The theme is “pretty in pink” and there are bright disco lights and dark balloons scattered all across the image.

Obviously, what we're looking at isn't really a party in space, although that sounds like a lot of fun! What this picture actually shows is a spectacular cloud of gas and dust that astronomers call a stellar nursery. That´s because deep inside this pretty pink cloud, new stars are flaring into life. Unfortunately the thick dust traps and visible light from these newborn stars, so the Very Large Telescope can't see them.

It is the brilliant new stars nesting in the cloud that are causing it to glow this vivid colour. Their bright light shines on the material surrounding it, passing on energy to the gas and causing it to shine on its own. Why is it pink? Because different material shines with a different colour. This cloud is made mostly of hydrogen, the most common chemical in the entire Universe, and hydrogen glows red or pink.

Silhouetted against the glowing pink gas are clouds which look like “balloons”: even thicker clumps of dust, known as Thackery's globules. These globules are being sculpted into these funny shapes by powerful radiation shooting out of the hot, blue baby stars nearby. Their high-energy rays erode the clouds and break them down, like lumps of butter dropped onto a hot frying pan. Unfortunately, because of this Thackeray’s globules will most likely be destroyed before they themselves can collapse down to form new stars.

In it's 15 years of service the Very Large Telescope has made some Very Large Discoveries! These include taking the first photograph of a planet outside our Solar System (which you can see as the red blob in this picture), measuring the age of our Galaxy and much more! (And if you were curious: it found that the Milky Way is about 13,600 million years old. It would be difficult to blow out all those candles in one go!)