The Wings of the Seagull Nebula
6. februar 2013 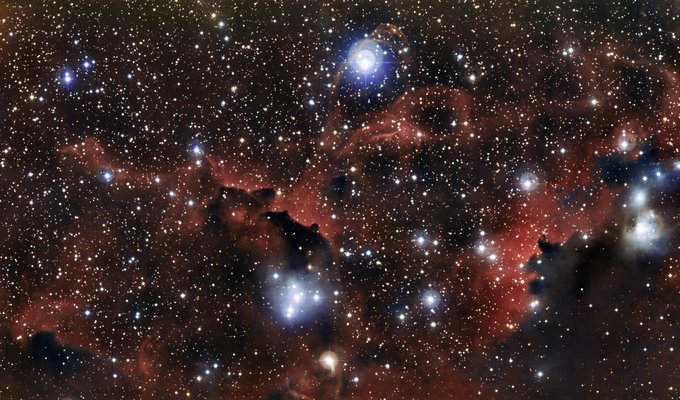 The shining stars and swirls of glowing gas in this picture make up part of the beautiful Seagull Nebula. This enormous bird-shaped object is made up of three large clouds of gas: the head and the two wings. You can see the entire thing here. This picture actually shows just a small part of the nebula, can you guess which part? It's the wings! Did you get it right?

The glowing red gas in this picture isn't just pretty, it's informative. The colour tells astronomers that what we're looking at is hydrogen – the most common element in the Universe.

There are lots of materials on Earth, but did you know that when you break them down they're all made from just a few basic chemicals? We call these chemicals 'elements'. For example, Carbon is an element, but if you combine it with other elements you can form thousands of materials, like sugar, plastic and alcohol.

We can find these basic elements in space, too, by looking at the colours of light we collect. It's hot new-born stars that have formed within these clouds that are causing the hydrogen gas to glow brightly.

Hydrogen is extremely flammable. So much so that it was used as fuel for the Space Shuttle rocket! But, then again, it's hydrogen that burns at the core of stars making them shine, so who's surprised?!