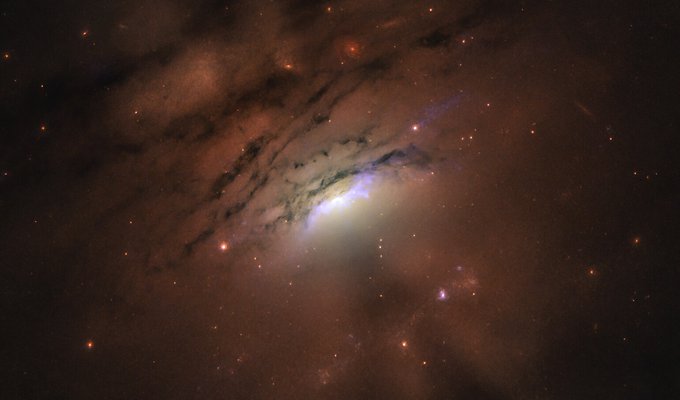 Black holes are the universe's monsters: voracious eating machines that swallow anything that ventures near them.

These monsters pull stars and gas into a disk that swirls around them. This feeding creates huge amounts of energy, which forms powerful beams of light from the superheated gas that is falling into the black hole.

These disks are so far away that it's nearly impossible for astronomers to pick apart any details within them. But, thanks to some helpful alignment and the NASA/ESA Hubble Space Telescope, astronomers are now getting a glimpse of the structure of the disk around the black hole in the nearby galaxy IC 5063.

The Hubble Space Telescope has observed a collection of narrow bright rays and dark shadows beaming out of the bright center of the active galaxy IC 5063. One possible explanation for the effect is that the dusty disk of material surrounding the black hole is casting its shadow into space. Some light travels through gaps in the dust ring and this creates the bright rays we can see in the image above. This resembles the floodlights one might find at a Hollywood movie premier!

Although astronomers have been studying this galaxy for many years, it took a non-scientist to make the surprising discovery. Judy Schmidt is an artist and amateur astronomer based in California, USA. She uncovered the dark shadows when she was working with Hubble images of the galaxy in December 2019. She often looks through the giant catalog of Hubble data to find interesting observations that she can turn into beautiful images.

Thanks to Judy Schmidt’s special find and the careful eyes of the Hubble Space Telescope, astronomers can now study the details of the bright rays and dark shadows beaming out of the bright center of this active galaxy.

The Hubble Space Telescope’s mass is roughly three times that of a hippopotamus and it measures about the same size of a school bus!