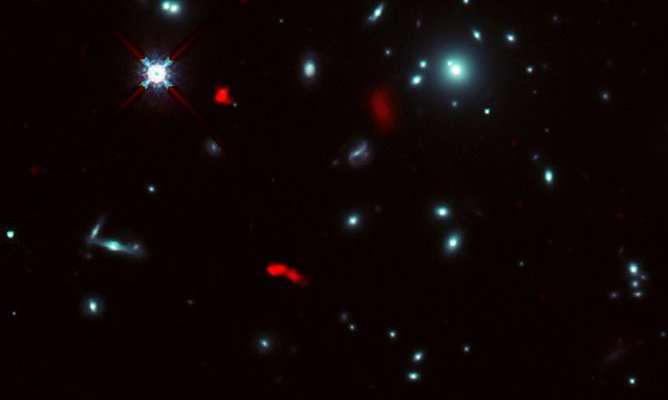 Have you ever tried birdwatching? When a bird is too high up a tree or too far away, it’s hard to see its color or shape with clarity - and then you might need a binocular to help magnify that little animal. This is because the more an object is distant from us, the harder it is for us to see it.

Astronomers have the same challenge: galaxies and stars that are very far away appear smaller and fainter making it extremely difficult to see what is inside them. The farther we look into space, the more we “see into the past”, as light itself takes time to reach us (even if it travels at the incredible speed of 300,000 km/s!). Scientists believe that most of the small and faint galaxies might have formed closer to the Big-Bang.

A team of researchers managed to see the light of a very far out  and small galaxy, named RXCJ0600-z6. It was born when the Universe was still very young, almost a billion years old (the Universe today is 14 billion years old). Scientists used the Atacama Large Millimeter/submillimeter Array (ALMA) but also had great help from a “natural binocular”, or better, a natural telescope: the gravitational lensing effect of a gigantic galaxy cluster, called RXCJ0600-2007.

The fact that this cluster is so incredibly massive (a thousand trillion times the mass of the Sun, hard even for astronomers to imagine how big it is!) that its strong gravity makes spacetime around it bend, amplifying the light of objects behind it like a giant natural lens or a magnifying glass (like in this video).

This effect helped magnify the light of the RXCJ0600-z6 baby galaxy. As the galaxy appears bent in the images because of gravitational lensing itself, astronomers used data from other telescopes such as the Hubble Space Telescope  and the Very Large Telescope to “reconstruct” the actual shape of the galaxy and wipe out the lensing effect.

Do you know what else they found? The galaxy they were looking at is rotating, almost like it were riding an amusement park roundabout!

This is quite odd because gas in young galaxies does not flow in any certain direction — it moves randomly, almost like frightened chicken in a hen house. This is the first time astronomers can actually see the internal movement of a baby galaxy with such faint light.

Researchers hope that a better understanding of how this galaxy works can give them important clues about galaxy evolution and the early Universe, getting us all a step closer to the Big Bang.

The image shows a picture of the galaxy cluster RXCJ0600-2007 (the gravitational lens) taken by the NASA/ESA Hubble Space Telescope, combined with gravitational lensing images of the distant galaxy RXCJ0600-z6 (the “baby galaxy”)

Scientists observed the gravitational lensing effect for the first time in May 1919 during a solar eclipse that nowadays is world-famous because it proved that Einstein’s theory of general relativity was right. A team in Sobral, northeast Brazil and another in the island of Príncipe (off the west coast of Africa) observed the same eclipse and saw that stars in the Taurus constellation were not exactly where they should be — because of the gravitational influence of the Sun!