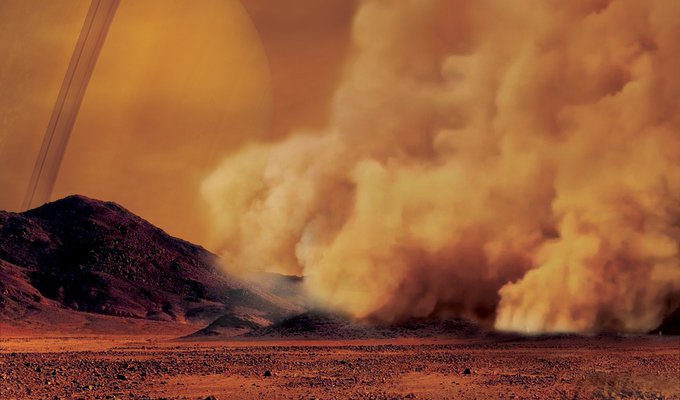 Until recently, dust storms have only ever been seen in two places — Earth and Mars. But we’ve just discovered they also happen on Titan, Saturn’s largest moon. One of the most exciting things about this discovery is that it was made by the Cassini spacecraft, which crashed into the Saturn in 2017!

Cassini was launched in 1997 and flew across the Solar System to study Saturn and its moons. For 13 years it carried out its mission with enthusiasm, showing us lightning storms dancing through Saturn’s cloud tops, revealing that fresh ice is still being added to its giant rings and lots more.

Unfortunately, Cassini reached the end of its mission last year and was plunged into Saturn, where it was crushed and vaporized by the planet’s strong gravity and thick atmosphere.

Yet the little spacecraft is still making new discoveries!

Like Harry Potter delving into Dumbledore’s Pensieve, scientists have been rooting through Cassini’s memories, and they spotted some unusual behaviour on Titan in 2009. Areas the size of the UK (sometimes double that) were brightening for hours or days at a time.

Originally these were thought to be giant storm clouds. Titan is a fascinating world. It’s the only moon in the Solar System with a thick atmosphere and the only place in the Universe (other than our planet) that has lakes, seas and rivers.

There is one big difference though. While these liquid bodies on Earth are filled with water, on Titan they are mainly made up of a chemical called “methane”.

Much like the water cycle on Earth, methane creates weather on Titan. It rises to form clouds before raining back down to the ground and beginning the cycle again.

Weather on Titan changes with the seasons, too. At certain times of year, these harmless rain clouds develop into violent storms. This is what scientists thought they were seeing on the moon back in 2009.

But on closer inspection, these glowing regions were far too close to the surface to be clouds. Plus, these bright patches were all appearing over Titan’s sand hills. They quickly realised that they were something entirely new – dust storms.

Strong winds before the start of one of Titan’s violent storms were kicking up huge clouds of sand from the hills below. Thanks to the new discovery, we’ve learned Titan is even more similar to Earth than we realised. Even after it’s retirement, Cassini still has a lot to teach us!

While this is the first times a dust storm has been seen on Titan, it’s actually not that surprising. Back in 2005, Cassini dropped a small probe onto the surface of Titan. As it landed, a small amount of dust was thrown into the air.