A Toast to a Middle-aged Star! 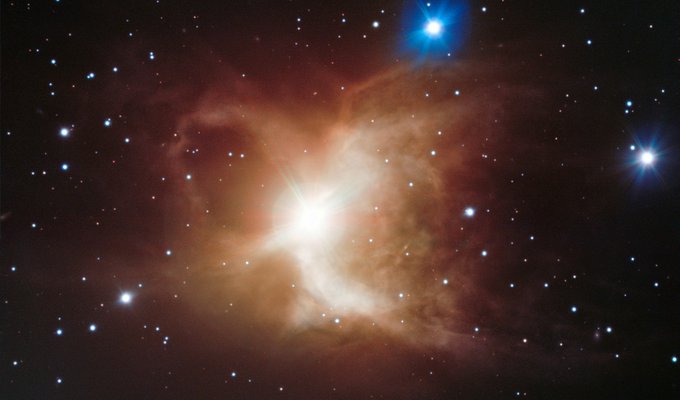 Located far from Earth in the Southern night sky is the Toby Jug nebula, which has been captured in amazing detail in this new photograph. The cloud of pale gas surrounds a huge Red Giant star that has five times the mass of our Sun! The bright light from the star in the middle reflects off the gas, causing it to glow. The nebula was named by two British astronomers. To them, the pale swirls of gas resemble the handle and bowl of an old English cup called a Toby Jug.

Although the star at the heart of the nebula is millions of years younger than our Sun, it's already in a much later stage of its life. This is because more massive stars run through their lives more quickly than less massive ones. Our Sun is 4.6 billion years old and it's only just hitting middle age, whereas this star will live to be just a few million years old because it has much more mass. The Red Giant phase is just a small portion of a star's lifecycle, making the object in this picture a pretty rare sight!

Eventually, when our Sun has burnt through most of the hydrogen in its core, it will also bloat into a Red Giant. Astronomers think that when this happens, our Sun will inflate to well beyond the Earth's orbit. This means it will engulf all of the rocky inner planets of our Solar System: Mercury, Venus, Earth and maybe even Mars!

With the extreme speed at which technology is advancing, there's a chance that humans could be living on a different planet by the time the Sun becomes a Red Giant. There are already a few humans on the International Space Station. This cool website allows you to keep track of how many people are in space at any time: http://www.howmanypeopleareinspacerightnow.com/