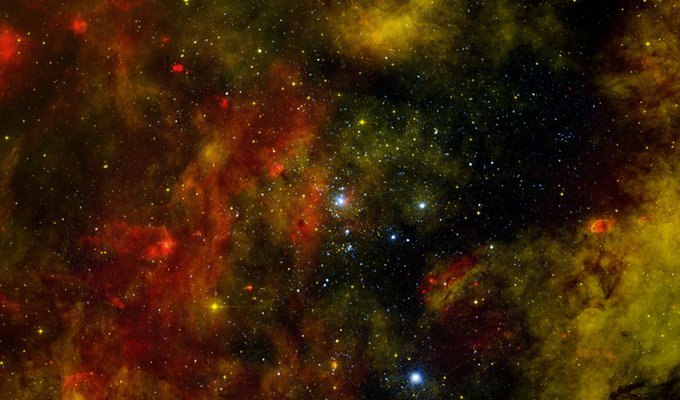 If you wanted to learn about young people, you would probably visit a school where there are lots of young people, right? This photograph shows a star ‘school’ — home to over a thousand of the biggest and brightest young stars in the sky. When astronomers want to study young stars, this cluster — called Cygnus OB2 — is one of the first places they look.

Cygnus OB2 is the largest star cluster in the northern half of the sky, it contains about 30,000 times as much material as the Sun! It also happens to be one of the closest to Earth. So why didn’t you hear about this before? Well, it is almost completely hidden behind a massive dust cloud. To study it, astronomers have to use telescopes that can ‘see’ in X-ray and infrared light. These types of light can go through the thick dust where visible light cannot.

One of the most interesting — but unfortunate — discoveries that astronomers made while studying the massive, young stars in this cluster, is that most of them will host fewer planets than their brothers and sisters in smaller clusters.  Some might not even host planets at all!

When a star forms, there is always some material left over. This forms a disc of dust and dirt, like a thicker version of Saturn's rings. Within this disc, small dust grains made of rock and ice can form, and these sometimes merge together into larger and larger objects. Imagine rolling a snowball around in the snow: it becomes bigger and bigger as it collects snow. This is how planets are born.

However, massive, young stars can destroy the dusty discs of their smaller neighbours with their intense energy, long before any planets could be born! This means that Cygnus OB2, and other enormous star clusters, probably don't contain as many planets as we'd thought!

One of the brightest stars in our whole Galaxy lives in this cluster. It's nearly two million times brighter than the Sun!