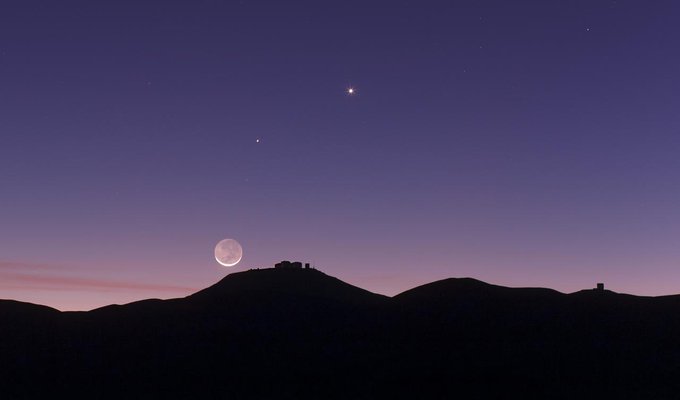 In this photo, it looks like the Moon wants to be a crescent and a Full Moon at the same time! It’s because some sunlight bounced off the Earth and dimly lit the side of the Moon that is facing away from the Sun. This is called earthshine. Recently, astronomers used earthshine to help in the search for aliens.

But planetshine is very dim and drowned out by the bright light of stars, making it difficult to observe. However, when starlight bounces off a planet, something happens to the light that changes some of its properties. Astronomers describe the altered light as being ‘polarised’. So, by looking specifically for polarised light, astronomers can pick out the dim light from planets.

Recently, astronomers tested this by studying earthshine. From this, they managed to work out that the Earth’s atmosphere is partly cloudy and that there are oceans and plants on its surface. Basically, they found life on Earth! This may sound silly, but this new method could eventually lead to finding life elsewhere in the Universe!

The Earth’s clouds reflect much more sunlight than its oceans and land. This means that earthshine is much brighter when it is cloudy.