Countdown to Cassini's Grand Finale
May 4, 2017 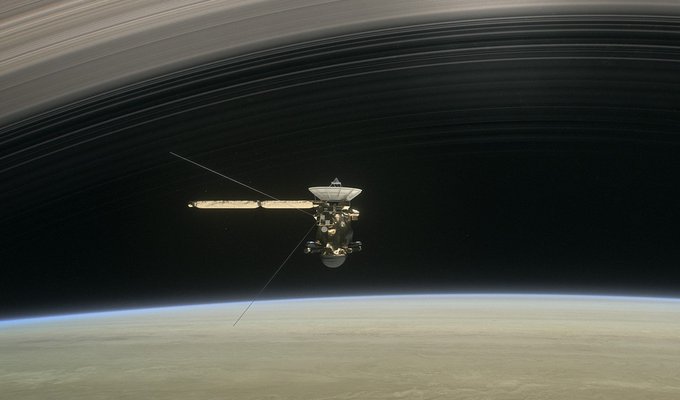 After spending nearly 13 years orbiting Saturn, the Cassini–Huygens mission will soon be over.

The Cassini spacecraft was launched from Earth in 1997. It then spent seven years travelling across the Solar System before arriving at Saturn.

A few months later the Cassini “mothership” released the Huygens probe (pronounced HOY-gens) onto Saturn’s mysterious moon Titan. This was the first landing in the outer Solar System!

During its time on Titan, Huygens revealed several things the moon has in common with Earth. It has a thick atmosphere, weather (on Titan it rains a chemical called methane instead of water) and lakes (also methane). However, it’s much colder than Earth, with a surface temperature of -180°C, which is twice as cold as the South Pole.

When Cassini left Huygens behind on Titan, it continued to explore Saturn, its rings, and its family of moons. The spacecraft spotted water spraying into space from another moon, revealing an ocean hidden beneath its icy surface that could possible be a home for alien life.

But, after years of hard work, Cassini is now running low on fuel. Scientists have decided to end its journey by plunging it into Saturn on 15 September. This will avoid it accidentally crashing into any of Saturn’s moons, keeping them untouched for future studies.

Until then, Cassini is spending its final months performing a series of daring dives between the planet and its famous rings. An area that has never been explored before.

Cassini will take the first detailed photos of the rings closest to Saturn and the planet’s clouds. It will also measure Saturn’s gravity to help scientists work out what the inside of the planet is like.

So, even in its final days Cassini is helping us to better understand our giant cosmic neighbour.

Saturn is a gas giant, meaning it doesn’t have a solid surface. Cassini will sink down into its atmosphere. The deeper it sinks, the more heat and pressure it will feel, until it’s eventually crushed and roasted.

Something New in the Sky!