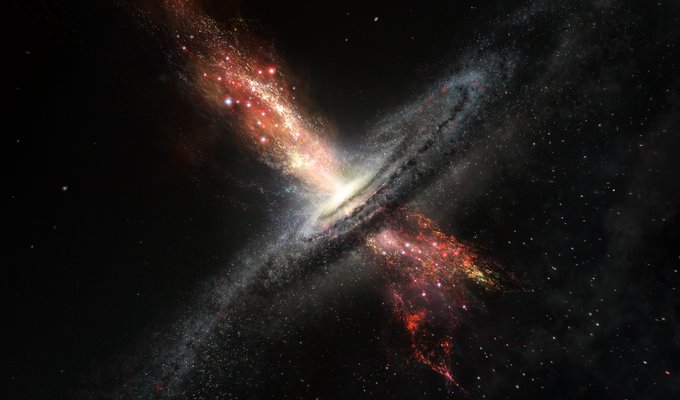 Black holes are known for their destructive behavior – like the ability to rip apart stars and planets, and swallow them whole. But black holes are actually valuable members of our cosmic society, which give a lot of energy back to the Universe.

Supermassive black holes lurk in the cores of most galaxies, gobbling up nearby cosmic gas and dust. As they feed, energy is released and heats up surrounding material, sending it blasting from the galaxy in both directions. An artist made this awesome picture to show us the stunning jets created.

These young stars are thriving in the wild environment they call home. They are hotter and brighter than other stars, which form in the main part of the galaxy.

They’re also much more active, with many of them hurtling rapidly away from the galaxy centre. Stars that form farthest from the galaxy run the risk of flying out of the galaxy altogether, spending the rest of their lives roaming the dark reaches of space, alone!

This might actually answer a question that has been puzzling astronomers for years: how do spiral galaxies get their unique central bulge?

This discovery might also solve the mystery of how certain chemicals (like oxygen) reached the space between galaxies. If stars are jettisoned out of a galaxy and then explode, the chemicals within them could be released into space.