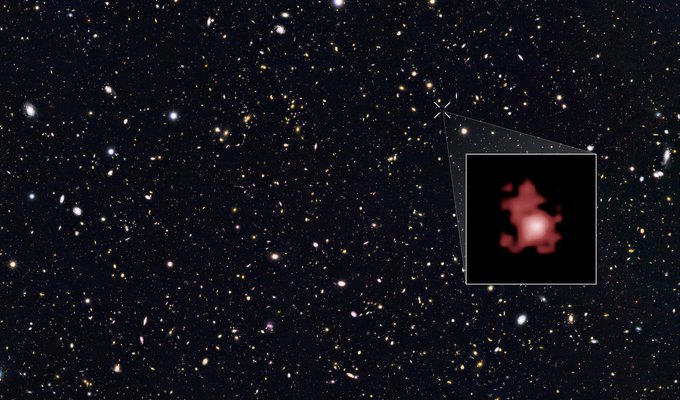 The Universe began with a Big Bang about 14 billion years ago. The entire Universe was inside a tiny bubble, billions of times smaller than a pinhead. Then suddenly…the Universe that we know burst into life.

In less than a second, the Universe grew from smaller than a single hair, to bigger than a galaxy. And it kept on growing. In fact, the Universe is still expanding today, growing larger and larger all the time.

Many years ago, a man named Edwin Hubble noticed that galaxies far away from us appear much redder than normal. We call this effect ‘redshift’. Their light looks red because they are speeding away from us. And the ones that are farthest away are moving the fastest!

Using the same technique as Hubble (and a space telescope named after him!), astronomers have just shattered the cosmic distance record by measuring the distance to the most remote galaxy ever seen in the Universe!

The new galaxy is a whopping 13 billion light years away, 150 million light years farther than the previous record holder! The light we’re seeing from this galaxy has been travelling across space towards us since the Universe was just 400 million years old — that’s not long after the very first stars began to form.

The remote galaxy is tiny compared to our galaxy, the Milky Way. But it is small and mighty; 20 times more stars are being born there, than in the Milky Way!

The Tail of the Disappearing Comet