After 100 years, scientists have detected gravitational waves for the first time!

Gravitational waves (pronounced ‘grav-it-AY-shon-al waves’) are 'ripples' in the fabric of the Universe. (Read “The Warped Fabric of our Universe” to learn more about this.) These ripples are caused by violent and energetic events in space, like black holes colliding, stars exploding and even the birth of the Universe itself.

It was a scientist called Albert Einstein who predicted that gravitational waves exist, back in 1916. But actual proof of their existence didn’t arrive until 100 years later.

Although their birth was extremely violent, by the time the gravitational waves reached Earth they were absolutely minuscule — a million, million times smaller than the width of a human hair! To have any hope of detecting them, we needed the most sensitive measuring tools in the Galaxy: the LIGO instruments.

There are two LIGO instruments; each one is made up of an L-shaped tunnel that stretches for 4 kilometres. Laser beams shine back and forth down the tunnels. Using these beams it’s possible to measure the length of the tunnel very precisely.

As gravitational waves pass through Earth they stretch and squash the planet ever so slightly. This causes a tiny change in the length of the LIGO tunnels. Measuring this change is how we spotted the gravitational waves and finally proved, beyond a doubt, that Einstein was indeed a very clever man!

When these two black holes collided they had more power than the light from all the stars and galaxies in the Universe…multiplied by ten! But it was only for a tiny instant.

Galaxies Spin Faster as They Get Older 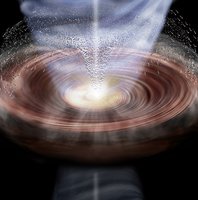