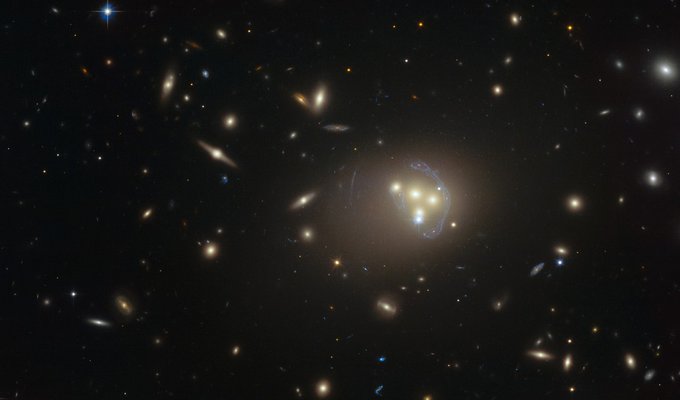 Dark matter is a mysterious and peculiar material that got its name because doesn’t give off any light - it’s totally invisible. Yet, astronomers think there is 5 times as much of this strange material in the Universe as there is normal matter that we can see.

We know that dark matter exists because we can see the effect that it has on the things around it. Like seeing paw prints in the snow made by an invisible dog. And we know that it mostly hangs out around galaxies. In fact, almost every galaxy with the same shape as the Milky Way (which has a spiral shape) is surrounded by an envelope of dark matter.

All the clues hinting at the existence and whereabouts of dark matter are caused by its gravity pulling at other objects. At least, until now.

This picture shows a colossal cosmic collision, four giant galaxies crashing into each other all at once! As astronomers watched this violent event, they noticed that the dark matter cocooning one of the galaxies, was lagging behind the rest.

This might not sound like much, but it told them that a new force must be at work. Possibly a force that has never been seen before and something that only dark matter can make and feel — kind of like the dark matter is kicking itself away!

Over 95% of the stuff in our Universe is totally invisible to us. This includes dark matter, but the main ingredient is a mysterious force called dark energy. It pushes everything apart, a bit like the opposite of gravity!

How to Feed Your Galactic Monster

Searching for Buried Secrets on Mars