Why You Couldn't Hide Your Spaceship in a Nebula 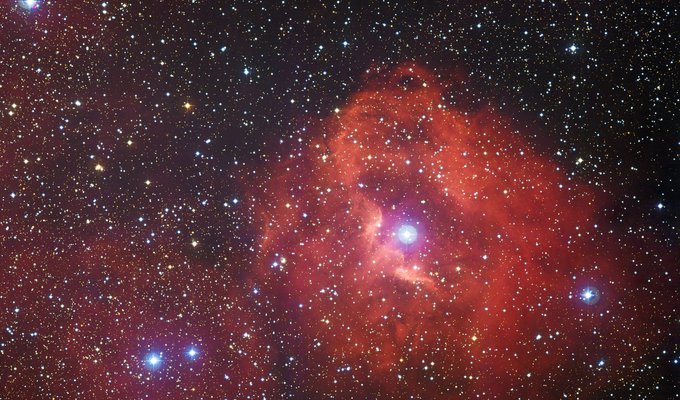 This new space photograph reveals a cosmic cloud (or 'nebula') called Gum 41, which is made up of hydrogen, the most common gas in the Universe.

In the middle of this nebula are lots of brilliant, hot, young stars. The stars are shooting out high-energy light that is causing the surrounding hydrogen to glow this vivid scarlet colour.

Many of the most famous astronomical photographs are of colourful nebulas, like this one. In these pictures, the clouds appear to be thick and bright, but this is actually misleading.

If a human space traveller could fly a spaceship through Gum 41, they would probably not notice they were inside it at all! These clouds are spread so thinly that they are too faint for the human eye to see up close.

These clouds are like a very, very thin fog. From a few metres away, fog seems like a cloudy wall that you will walk in to. But, as you move closer the fog seems to disappear – it always seems to stay just out of reach. And these clouds are much less thick than fog!

This helps to explain why this large, bright cloud wasn’t discovered until 1951!

You can’t always believe what you see on TV; Star Trek, Star Wars and BattleStar: Galactica have all shown spaceships hiding inside thick, gassy nebulas. But now you know better – these clouds offer no refuge at all for a spaceship trying to stay hidden!

The Many Faces of our Night Sky

Our Universe is big, beautiful… and mostly invisible!