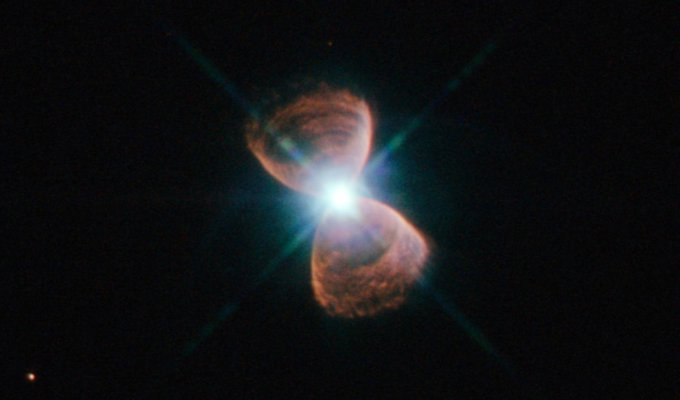 Like a last gasp of breath, Sun-like stars puff away their outer layers of gas at the end of their lives. This gas floats away into space and forms beautiful and striking clouds, which are called planetary nebulae (although they have nothing to do with planets). These clouds come in different shapes, one of which is bipolar planetary nebulae. These look like ghostly hourglasses or giant, cosmic butterflies around the remains of their parent stars.

Planetary nebulae get their shape from their star and their surroundings, such as whether the star has planets or other stars orbiting it. The shapes of bipolar nebulae are some of the most extreme. This photograph shows why: this bipolar nebula’s parent star has powerful jets blowing material outwards from its North and South poles! The result is this fantastic and delicate butterfly-shaped cloud.

Each planetary nebula comes from a different star and they never get close enough to touch each other, so each nebula should be totally different. Yet, astronomers looking at 100 planetary nebulae in the bulging centre of our Galaxy, the Milky Way have found that most of the bipolar planetary nebulae in this region are acting in the same, strange, way. The centre of the Milky Way is a particularly busy and chaotic place, but here these nebulae are neatly lined up in the same way! They seem to be “lying down” along the disc of our Galaxy.

While the parent star does shape these nebulae, this new finding hints that there is another, more mysterious influencer: our Galaxy itself. Astronomers think the bulge at the centre of our Galaxy is acting like a giant magnet, making these bipolar planetary nebulae line up like iron filings close to a magnet.

The heart of the Milky Way is crammed full of gas, dust, and stars. This is called the central bulge and it's the reason that you can only see a small number of the enormous amount of stars in our Galaxy. There's so much dust and gas within the bulge that you can't even peer into it, let alone see through to the other side.

This Space Scoop is based on Press Releases from Hubble Space Telescope , ESO .

Are We Living in an Island Universe?