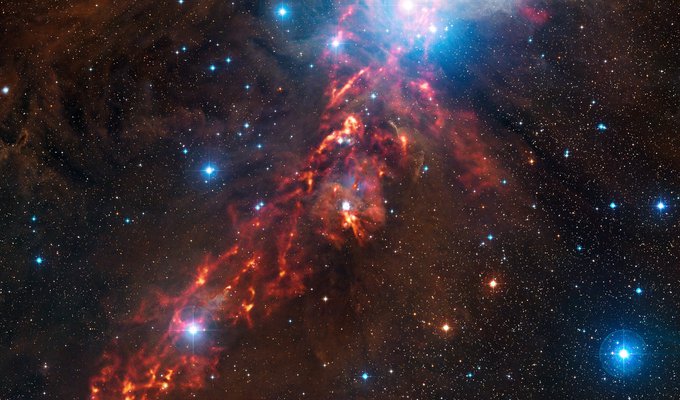 The Universe is a pretty cool place. If you hopped on a tour bus for a complete tour of the cosmos, it would take you past a number of “hot” attractions, like the Sun, monster black holes and billions of shining stars.

But mostly, space is incredibly cold. The empty blackness that makes up most of the Universe is on average minus 270°C! That's just a couple of degrees above “absolute zero” — which is -273°C, the coldest possible temperature.

The funky object in this picture is also pretty “cool”. It might look like a ribbon of hot fire stretching through space, but this is actually a cold cloud of gas and dust, which is -250 °C! That's freezing!

The red colour is the faint glow of light that our eyes can't see. This is easier to understand if you imagine light is like sound: some sounds are too low for our ears to hear, but other animals, for example whales, can still hear them.

The invisible light being emitted by the red cloud in this picture is called radio — the same light used to send information to your radio and mobile phones. In the same way that our ears can't hear very low sounds, our eyes can't see radio light. However, some of our telescopes can. Astronomers make pictures from the data collected by these telescopes and colour them, so we can enjoy these otherwise-invisible objects.

It might seem strange that they chose to colour something so cold in red. Normally we associate red with hot things, like the hot-water tap or fire, and cold things with blue. But in space it works the opposite way around. The bright blue points scattered around this picture are stars – very hot young stars. As these stars cool, they will actually become more red!

Where's the coldest spot in the Universe? Not the South Pole, where the temperatures plunge to a mere average of -62°C. Not even in deepest outer space. As far as scientists can tell, the lowest temperature ever reached was right here on Earth! Scientists in a laboratory managed to create temperatures astonishingly close to absolute zero!

The Many Faces of our Night Sky

The Dark Side of Star Clusters