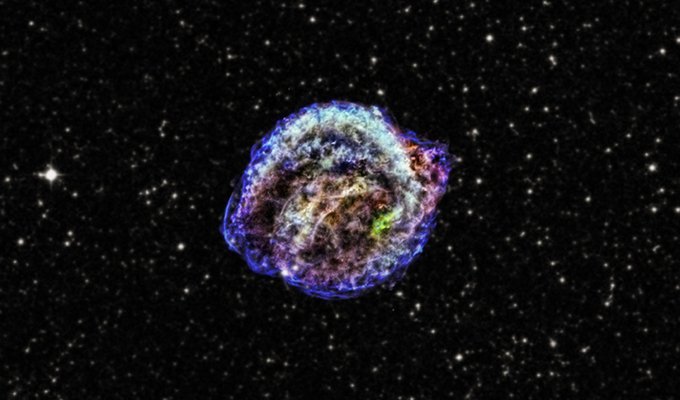 In 1604, a new star appeared in the night sky. It shone brighter than all the other stars and for three weeks it was even visible during the day!

This mysterious beacon marked the explosive death of a nearby star. These explosions are called supernova, and they give off so much light that for a few weeks, they can outshine a galaxy of billions of stars! Then slowly they fade away, leaving behind beautiful glowing clouds of gas, like the one in this picture.

But let's travel back to a few millions years earlier, because the story of this star gets even more interesting. The star that exploded in 1604 began its life as an average star, similar to our Sun.

When an average-sized star dies, the result is much less dramatic than a powerful supernova. Instead of exploding, they collapse.

The material from the centre of the star ends up squashed tightly down into a tiny, heavy ball called a white dwarf star.

This is how this star died for the first time, long before 1604. But how did it end up dying a second time?

Well, astronomers have recently discovered the answer to that question. The white dwarf had a companion, an enormous red giant star.

Even though the red giant was much larger, the white dwarf’s gravity was much stronger. It began to rip gas off its companion, pulling the material onto itself.

Eventually the star's own greed led to its demise. It stole so much material that it became unstable, leading to the spectacular explosion that our ancestors saw!

More Information: The astronomers who made this discovery have created a video showing a simulation of the supernova explosion; you can watch it here and get an amazing close-up view of one of the most explosive events in nature!

Cool Fact
This Space Scoop is based on a Press Release from Chandra X-ray Observatory .

Health Warning for a Nearby Star