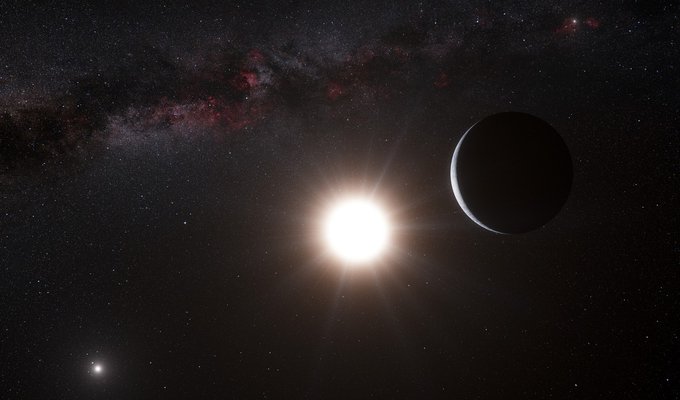 Astronomers have found a planet the size of Earth just outside of our Solar System, orbiting around our nearest star! For a long time astronomers have talked about the possibility of planets around this star, called Alpha Centauri. It's very similar to our own sun, and the closest possible place for life beyond the Solar System. But years of searching revealed nothing. Until now.

More than 800 planets have now been found outside our Solar System, we call them 'exo-planets’. Exo-planets are very difficult to spot, since their dim light is easily drowned out by their star. Just imagine trying to catch sight of a tiny firefly shining in front of a car’s highlights! Because they cannot be seen directly through a telescope, astronomers have to be creative in how they find them.

One clever trick is to watch carefully to see if a star wobbles because of the pull of an exo-planet's gravity. To learn more about this technique, read “Wobble Watching to Find New Worlds”. This is the most successful method yet and it’s how most exo-planets have been found, including our new Earth-sized neighbour.

While the newly discovered exo-planet is similar to the Earth in size, it is much closer to its star than our planet. In fact, it's even closer than Mercury, the planet closest to our Sun. A year on the exo-planet would be just three days long (this is how long it takes the planet to complete one orbit of its star). On Earth it's a little over 365 days!

Being so close to its star, the planet would be ultra hot; much too hot for life as we know it to exist. But finding an Earth-sized planet so close to our Solar System is still an exciting discovery and takes us one step forward on the road to finding alien life!

The new exo-planet is actually in a triple star system, called the Alpha Centauri system. This means three stars are orbiting each other. Just imagine how the sky must look on this alien world!

Rings Around An Alien World

The Mystery of the Monster Pulsar