Galactic Get Together Has An Impressive Light Display
11. Dezember 2014 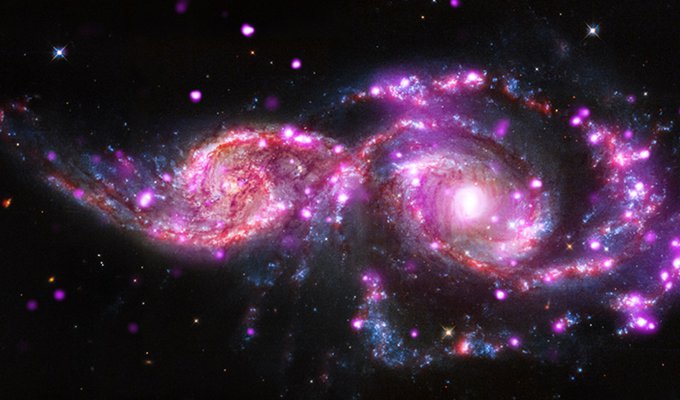 At this time of year, people all over the world are celebrating this festive season with beautiful light displays. This new image of two colliding galaxies is a cosmic contribution to the celebrations. These two galaxies look like their spiral arms have been decorated with strings of pretty pink fairy lights!

These galaxies have been captured brushing past each other as they travel through space. The encounter has created one of the most amazing collections of super bright X-ray lights ever seen! Each of the 28 pink blobs in the picture is a special, extremely bright object known as an “ultraluminous X-ray source”, which we can shorten to ULX.

Researchers think that the stars that cause ULXs are very young (at least, in star terms). Whereas our Sun is around 5 billion years old these are probably closer to 10 million years old.

This is why most of these ULXs have been found in the spiral arms of the galaxies, where there are lots of stars forming.

These galaxies are sprouting new stars at a rate that is over 10 times faster than our home galaxy, the Milky Way.