Astronomers have taken lots of beautiful images of galaxies in the Universe, but we don’t have a single photo of our own galaxy, the Milky Way. That’s because no astronaut or man-made spacecraft has ever left the Milky Way in order to be able to turn around and take a picture of our home galaxy.

But astronomers still have a good idea about what the Milky Way looks like: a spiral shape with a centre that is slightly stretched out. We only see the Milky Way’s shape as a thin strip across the night sky, rather than as a spiral, because we are living within it and looking at it sideways. (Imagine picking up a dinner plate and looking at its edge – all you see is a thin strip of the plate, rather than its full circular shape.)

But if you’re eager to see how an alien from another galaxy would see the Milky Way, then astronomers have come up with the next best thing. The spiral galaxy shown here in this new photo is incredibly similar to what astronomers think our Milky Way looks like – it’s our galaxy’s double!

The furthest that a man-made spacecraft has travelled is to the edge of the Solar System. The spacecraft is called Voyager 1 and it has been travelling away from Earth for the past 34 years! 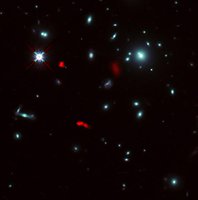