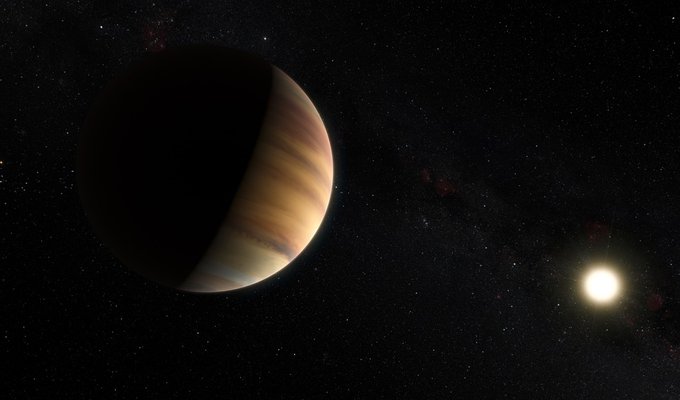 Aladdin might have sung about showing Jasmine a ‘whole new world’, but the words should really belong to the European Southern Observatory. Thanks to one of their telescopes, we’re finally able to study a planet beyond our Solar System using normal starlight reflected off its surface for the very first time!

Almost 2000 so-called exoplanets have now been discovered. Astronomers have found almost all of them using clever tricks such as “wobble watching” or using stars as magnifying glasses.

This is because planets are incredibly dim and far away. They are easily lost in the glare of the dazzling stars they orbit. Trying to photograph a distant planet is like trying to see the light of a tiny glow-in-the-dark toy in a brightly lit room.

The ability to collect light from distant worlds is very exciting; it will allow us to work out all sorts of new facts about them. We can now measure their size, the path they orbit along and more.

For example, we’ve learned that 51 Peg b is bigger than Jupiter, but is much less dense! It also orbits much closer to its parent star than Jupiter, making it a giant, blisteringly hot world. It might not be the sort of place you’d want to visit, but it’s a step in the right direction.

Scientists have calculated that billions of stars in our Galaxy will have between 1 and 3 planets that could have water on the surface – the vital ingredient for life!