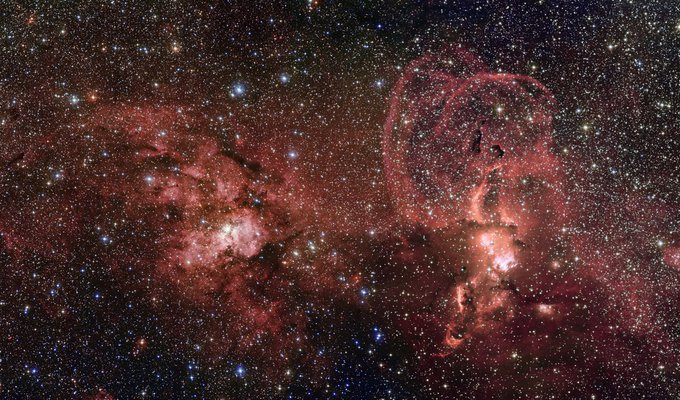 This spectacular new photograph of space contains so many bright shining stars it looks like someone spilt a pot of glitter over it! This small patch of our Galaxy contains thousands upon thousands of stars, and the two bright patches in the back of the picture are churning out more!

On the right is a collection of glowing gas clouds called NGC 3576. The dark, curling clouds hide hundreds of newly born stars and fresh, forming stars.

On the left is a very bright star cluster called NGC 3603. This cluster is famous within our Galaxy for having the highest concentration of massive stars of any star cluster! (There are about 1300 star clusters in the Milky Way.)

The other thing that makes this particular star cluster so fascinating is hidden deep in its centre – a system of four massive stars bound together by the force of gravity.

These four stars are what we call Wolf-Rayet stars (pronounced Wolf Ray-AY), named after the two French astronomers who first spotted them. Each one is a true beast, over 20 times more massive than our Sun and at least a sizzling five times hotter!

While Wolf-Rayet stars are thought to be fairly common across the Universe, they live such short lives we rarely stumble across them. Only 500 examples have been found in our entire Galaxy.

The sad story of these stars is that they're doomed to live just a few million years before going out in a blaze of glory, as violent supernova explosion. (That's compared to the billions of years that our calmer and more stable Sun will live). But worst of all, is that they bring their rapid ends upon themselves!

Wolf-Rayet stars are the “windy cities” of space, blowing out gusts of stellar wind much stronger than an average star. Unfortunately for them, these winds blast huge amount of their material into space. As a result, Wolf-Rayet star looses enough material every year to create three new Earths!

The most massive star in the Universe is a Wolf-Rayet star. The heavyweight star has been given the incredibly uninspired name 'R136a1', and it weighs in at 265 times more massive than the Sun!